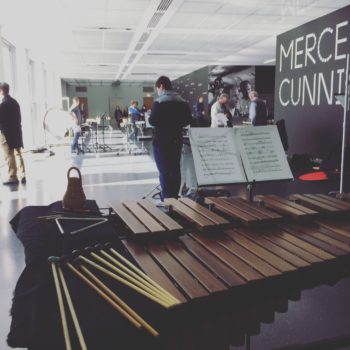 The last few months have flown by with several big performances (and their preparations) in addition to several smaller gigs and my sizeable teaching load. My trip to Truman State University with Beyond This Point was a lot of fun. We were able to work with some of the students in the percussion studio before presenting our program “Corporel: Having a Body.” Then, the performance with Beyond This Point and Matthew Duvall at Constellation was also a great success. It was a very thought-provoking program with several great new works that I really enjoyed being a part of. Lastly, this past weekend I joined up with Beyond This Point and Matthew Duvall again, but this time with Third Coast Percussion and 75 other Chicago percussionists to give the world premiere of Marta Ptaszynska’s “Voice of the Winds” at the Chicago Museum of Contemporary Art. Marta was there and even played one of the parts! My only wish was that I would have gotten to play AND been able to walk around and experience the piece as a whole. The picture above is from my station during the rehearsal.

I am looking forward to traveling to Calgary next week to perform again with Fifth House Ensemble. It has been several months since I have joined them to perform Journey LIVE, so it should be fun to play for another enthusiastic crowd. Several more performances of Journey LIVE have been confirmed for this Fall as well, and I am excited to continue working with such a great ensemble.

The semester is nearly complete at Roosevelt and Phoenix College, with a month left for Hinsdale Central High School. It has been another great semester watching students grow and achieve new heights in their musical education. As much as I love to teach, the summer’s lighter schedule will be a welcomed breather!