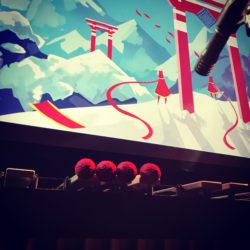 The new year and new semester are off to a fast start! I’ve already been to Ball State University to present a clinic to the Percussion Studio (picture below), along with giving a performance of Journey LIVE with Fifth House Ensemble. I’ll be traveling to Georgia Tech with Fifth House in a couple weeks to give another performance there. After that, I’ll be hosting Scott Shinbara and Kyle Maxwell-Doherty as we give an Atlas Percussion performance at UW-Milwaukee. We will also present that program later in April at the Fringe Festival in Oregon. Other highlights coming up include a duo performance with my colleague Nicki Roman at the North American Saxophone Alliance regional conference in Indiana on March 9th, and conducting a group of UWM students for their performance at the conference as well. Also during March, I’ll be on a several week run of a Carmina Burana production at the Skylight Theatre in Milwaukee. In April, our newly-formed Cross//Hatch Percussion group will be presenting a session at the Wisconsin Percussive Arts Society Day of Percussion.

In addition to those performances, the UWM Percussion Studio is presenting a full program at the department-wide convocation this Friday, and we’re also booking a few performances of our UWM Marimba Band this semester. We will be performing a session at the Wisconsin Percussive Arts Society Day of Percussion on April 13th, and our concert at UWM is on April 20th.